Chicken with sweet paprika for kids 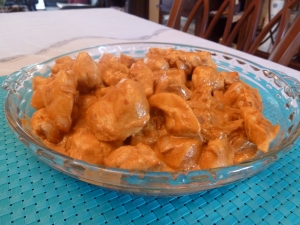 From the little I look, it seems you can make a more or less creamy version of this Hungarian dish. The traditional recipe, chicken paprikash,  calls for red bell peppers, chicken thighs or other bony pieces, and the onion cut in rings. I made this more kids friendly version, using cubed chicken breasts, chopped onion, and no peppers. Well, to be truthful, I just didn’t have any peppers handy. Otherwise I would have used them. Thanks to my friend Jana who suggested it!

Notes and tips: You can experiment with the consistency of the sour cream by adding more or less broth or water. If it becomes too runny, or you want to make it more lusciously creamy you can add more water and flour. I didn’t need to. I added broth gradually to bring the sour cream to the consistency you see in the photo and was happy with that.