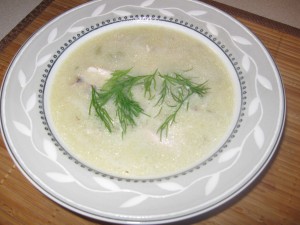 You remember the chicken soup post a while ago? I was telling you then about a version of this soup with dill that I’d given up after I had the kids for fear of them disliking the dill swimming in the soup. Well, I decided they’re old enough. I asked them if it’d be OK,  got OKed and went ahead. I’m afraid I was still pretty conservative, though. I meant to put more dill so that it looked much greener, almost like the traditional Greek Easter soup (mageiritsa).  But I guess I was out of practice.  So, here’s what’s different from the earlier post:

That’s it. Small variation but substantial  difference in the taste. My husband likes the `mageiritsa’  twist to it and my kids enjoyed the variation, too.  I have plenty of soup ingredients in my fridge this week.  This will be a soup week. Stay tuned.  And don’t forget to make Mondays special cooking your family’s favorite, even a tad festive meals.  What’s a better way to celebrate a brand new week?