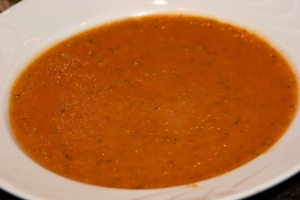 It’s the first chilly day of Fall and it’s a Sunday. On the kitchen table was the most recent Williams Sonoma catalog, which had couple of interesting recipes, despite its dramatic shrinkage  over the past year (they go green).  A vegetable soup got my attention. It was there to support the advertisement of a smoking gun. I don’t have a smoking gun so the soup didn’t get ‘smoked’ but the recipe was a hit regardless. A very rich and strong flavored soup made perfect lunch and would have easily made perfect dinner.  It  now boasts membership to our family’s hall of  fame soups.  You need to have zucchini handy. If your kids can work at the kitchen table or their room is next to the kitchen, this is a good  time to supervise their homework. The recipe is very easy but you will need to put things in a pan every 10 minutes or so for couple of times.

How to make: Heat the olive oil in a heavy skillet and cook the onion with the peppers. I used frozen peppers so I first sauteed the onion for about 7-8 minutes and then added and sauteed the peppers for another 3-4 minutes. Put the onions and peppers aside. In the same skillet, add 2 drops of olive oil and cook the tomatoes for about 10-12 minutes.  At this time, I added the salt, pepper, 2 frozen cubes of garlic pulp and 2 frozen cubes of basil pulp. When the tomato sauce was ready, I put it aside, added couple more drops of olive oil and sauteed the zucchini for about 10 minutes. In the meantime, I put the chicken stock in a pot and turned on the heat. When the zucchini was ready, everything went into the pot with the chicken stock (sauteed onions & peppers, tomato sauce, and zucchini).  Add the potato cubes and cook at low heat for 20 minutes. Puree the soup with a hand blender and serve with crostini. Mine were very simple. I brushed a cookie pan with very little olive oil, I pressed  4 slices of whole grain bread, turned them over so they have some oil on both sides and cooked at  360F/180C  for 10 minutes. Delish!

Notes and tips: I cooked the garlic and basil  with the tomato because I used frozen pulp for both. If you use fresh garlic and basil, you need to saute the garlic with the onion & peppers (couple of minutes before they are done) and use a blender to process the basil leaves with vegetable oil. The processed basil will go in the pot with the chicken stock with the rest of the ingredients.

Today our helper made the soup using the one and only zucchini we had in the fridge. It came out just great in taste but too thick. That’s probably because that one zucchini did not release enough water. Not a big problem. Extra broth or water fixes the consistency. So, when you make this soup bear in mind that what your soup should be  fairly thick and rich but if should not look like potato puree. If you can eat it  with a fork you know it’s too thick. Add more liquid!