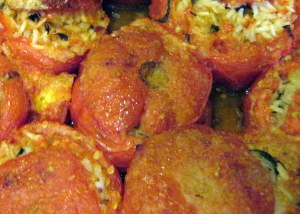 It is not summer if you haven’t seen stuffed tomatoes at your dinner table yet. Unfortunately, I don’t make this dish often because the tomatoes here (PA, USA) tend to be too “meaty” which is not optimal. But we were so anxious to bring summer that we got the best we could find and put the pan on fire to start sauteing the onions. You can, of course, stuff green peppers but my kids don’t like them so I passed.

How to make: First prepare the tomatoes. Cut the top part, as you see in the photos above and below. Using a spoon, remove the inside part of the tomato and keep it in a bowl. Arrange the tomatoes in a pan. Second, prepare the stuffing. Heat the oil in a deep pan and saute the chopped onion.  Add and saute the rice after you have washed and drained it. Then add 2 cups water, the tomato pieces and juice that you removed from the tomatoes (save half cup), salt, pepper, and pine nuts. Let the rice cook until it absorbs most of the water. Stir in the chopped parsley. Using a spoon, fill the tomatoes with the rice stuffing.  Fill the tomatoes lightly as the rice will grow a bit when you put the pan in the oven. Cover the tomatoes with the tops that you had removed before.  Drizzle on the top some olive oil, the half cup tomato bits and juice that you saved, ground Parmesan and/or bread crumbs. Pre-heat the oven at 375F/190C and cook for about an hour. 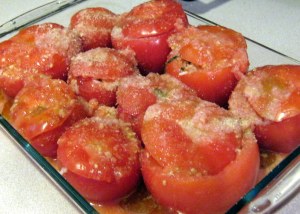 Stuffed tomatoes ready for the oven

Notes and tips: Pick tomatoes with thin skin. If  you don’t get enough bits and juice when you hollow them, add some tomato sauce from a can.  You can, also, add raisins to the rice stuffing. I don’t any more because  once I had a guest carefully removing them and putting them aside on her dish.   Don’t worry too much about what kind of rice you will use, despite common wisdom calling for short grain rice. I have cooked stuffed tomatoes with long grain rice and they were fine. In another version of this recipe, you can cook the rice less and add more water to the pan. Your choice. 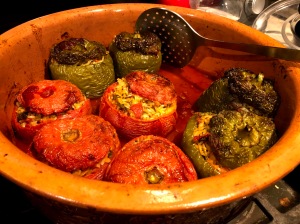 One thought on “Stuffed tomatoes”