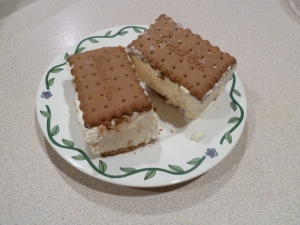 To my family’s great delight, I’m testing and re-testing the recipes that we discovered in summer while we were in Greece. Without any doubt, this ice-cream is a keeper. In summer I tried it following the recipe faithfully, i.e., using vegetal  cream.  When we came back to the U.S., I tried it with dairy, heavy cream and it worked. Because I wasn’t sure it would work I didn’t use biscuits.  Today, it’s all here: dairy cream, which is so much easier to find than vegetal cream,  and biscuits that I found at  Superfresh.   The little compromise we had to make using plain biscuits instead of biscuits with one chocolate side didn’t even get noticed. This ridiculously easy ice-cream is that yummy!

How to make: Use a mixer to beat the cream until it becomes fluffy. Don’t overbeat or it will turn runny. Use a mixer to beat the condensed milk for about five minutes. Combine the milk with the cream and the vanilla. I beat them all for a second or two to make sure they are evenly mixed. Cover and put the bowl in the freezer for as long as it will take you to line up the biscuits. Take a regular sized, rectangular pyrex or other type container that can go in the freezer. Line up the biscuits. Take the ice-cream out of the freezer and pour it over the biscuits. Line up another layer of biscuits. Try your best to align the bottom biscuits with the ones on top. It’s not trivial but it’s ok if you miss. Cover the container with cling film and put it in the freezer. In an hour or two take it out, if you want, and “cut”  the sandwiches to make them easier to come out nicely when it’s ready. Cover again, put back in the freezer and let it freeze for at least four hours.