My dinner today is seashell pasta with meat sauce 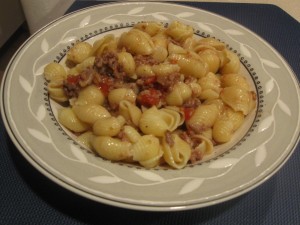 How to make: Boil the pasta in salted water according to packet instructions. Drain, rinse, put back in the pot and add half a tablespoon of olive oil.  In a saucepan, heat one tablespoon of oil and saute the onion at low heat for a few minutes. Add the minced meat and saute until the meat is brown, about 5 minutes. Add the wine and cook for a couple more minutes to allow the wine to evaporate. Then add the tomato cubes, maybe a bit more water if needed,  salt, pepper, oregano and one cinammon stick. Cook for half an hour. Remove the cinnamon stick, mix well with the seashell pasta and serve with grated Parmesan.